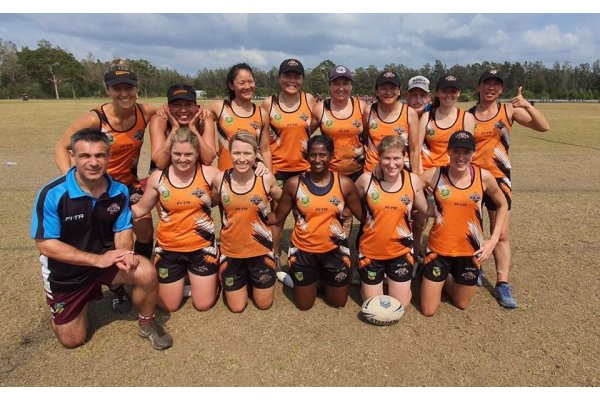 Women’s 30s took on a very tough competition, up against a few teams with years of playing togehther & a galaxy of superstars to call on. Throw in a heavy workload (9 round games) and we were definitely going to get our money's worth.

Friday started with a hard fought loss to the defending premiers Cronulla, then a game vs Mudgee where nothing seemed to go right - an unlucky 3-2 loss there meant the campaign was teetering on the brink. Luckily a Bec Hannon try on the bell to beat Coffs in the next game, and a powerful 8-0 win against Central Coast has the team back on track by the end of the day.

Saturday kicked off with a close loss to Manly and a solid win over Newcastle, before a belter of a game against Wollongong. The Devils were unbackable favourites to win the comp, let alone a round game against an unfancied Balmain, but the Tiger's girls rose to the challenge superbly - in front early, and pushed the eventual champions all the way to go down 4-3 (I know the score says 4-2 but the last one was a try and that’s all there is to it).

After another close win the girls went into their last round game on Sunday needing a win against Dubbo to sneak through. With fatigue (Finished the game with 10 fit runners) hitting in a big way in the second half it wasn’t to be though - down 2-1 in a very tight one.

Highlight - watching the girls give everything they had for each other, running on fumes till the final whistle.

Overall a terrific effort from a wonderful bunch of humans, and a privilege to be involved with.