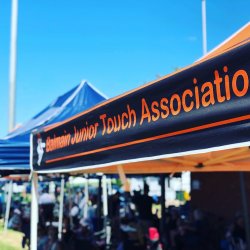 Balmain Touch is hosting a gala day for teams in final preparations for the Junior State Cup.

As a condition of entry all teams entered must be supplied with a referee from their affiliate.

Vawdon Cup is a weekly competition conducted throughout the Sydney Metropolitan area catering for Open & Youth divisions. The competition is scheduled to commence in August and concludes in October. Games are played in Sydney metro on Friday evenings and some Sunday double headers. To trial for Vawdon Cup players must be registered in the Balmain Touch weekly park competition.

The State Cup is the premier NSW Touch Football representative event and is conducted in Port Macquarie each year commencing on the first Friday in December. As the title suggest this is the State Championship and open to all NSW Affiliated Members.

Balmain Touch enter teams in each age group from under 8s to 18s each year to compete in the NSW Touch Junior State Cup held in Wagga Wagga in late February. To trial for Balmain you must be registered in our Monday night park competition. Trials are held in September and training is held twice a week over summer with a break for Christmas / New Year period. Most teams will also play in a series of gala days over this time also.

We have opened our expression of interest for Junior State Cup, please complete this EOI form to register your interest in trialling.